In 1989 as communism fell apart in Eastern and Central Europe, quite a few statues were falling and being destroyed. In Budapest however instead of destroying statues of Lenin, Marx etc they were collected and put on display in a park on the outskirts. 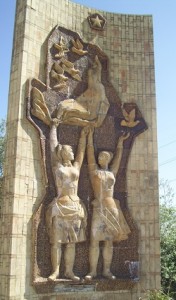 Memento Park consists of 42 statues, a Brabant car (manufactured in East Germany), a replica of the grandstand used during parades upon which a statue of Stalin was once displayed and an indoor exhibition with a film area.

Admission is 1500 HUF (about £4) with student reductions available. The park is on the outskirts of the city on the Buda side. Going by public transport catch the 150 bus from Kelenfold Metro Station (the terminal of the number 4 – green – line). For quicker but slightly more expensive travel there is a daily bus from Deak Ferenc Ter, the cities busiest Metro transfer point 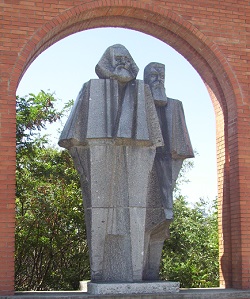 Of course Budapest is a city of statues and monuments and you don’t need to walk far through the streets close to the centre to clock up 42 statues for free, among them some from the communist era. The Soviet War Memorial in Szabadság tér (Liberty Square) being particularly impressive.

Nevertheless, if you enjoy seeing monuments from the communist era (and I do), the park is worth a visit, though the emphasis is on entertainment rather than analysis. A variety of souvenirs and novelty items are on sale.