The river Danube flows for 2850k from its source in Germanys Black Forest in Germany where the Brigach and Breg rivers join, before entering the Black Sea from its Delta which is acknowledged as Europe’s greatest bird and wildlife sanctuary. 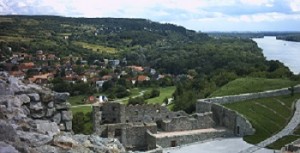 The journey takes the Danube by rugged cliffs, castles, vineyards and some of Europe’s most romantic cities.

The river is navigable from Germany to the Black Sea an is an important commercial route as well as a focus for a wide range of leisure and holiday activities.

The earliest civilisations in Europe were attracted to the river Danube. The Romans regarded it as the boundary of their Empire. Medieval Princes built mighty fortresses to guard over the river. Later Vienna and Budapest became political and cultural centres of the Austro-Hungarian Empire.

Today we can cruise the river, cycle or ride horses beside it, fish in it’s waters or see the birdlife that is attracted to it’s banks. We can experience delightful small towns and lively and cultured cities.