The capital city of Slovakia, Bratislava is close to Budapest, Vienna and Prague. 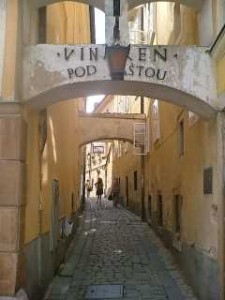 This may be one reason why it has  not yet developed a tourist industry comparable with it’s near neighbours.

Because of its position, Bratislava is an ideal base for touring the area. It is also a worthwhile short break destination.

The city centre is an historic and compact area of narrow streets and small squares. Much of it is pedestrianised.

The castle is the cities most distinctive landmark. Although some of the defences date back over one thousand years, the main building was reconstructed during the 1960’s, the original building having been largely destroyed in 1811.

The castle today houses a museum.

St Martin’s Cathedral is nearby. Consecrated in 1452, 11 Kings were crowned here during the period when Bratislava was capital of the Hungarian Empire.

Bibiana is an art experience for children.